The following post by Christopher Scott is part of an ongoing ‘Gothic Bible Blog Series’ and part of the Gothic Bible project, a collaborative project run by Sheffield Gothic and SIIBS at the University of Sheffield, and also the University of Auckland. You can find out more about the project here, and if you want to contribute to the blog series you can email us at Gothic Bible@sheffield.ac.uk or tweet us at @GothicBible.
Satan as the Masked Antagonist in Andrew Lloyd Webber’s The Phantom of the Opera(1986)

Even after its thirtieth anniversary, Andrew Lloyd Webber’s hit musical The Phantom of the Opera (1986) continues to amaze audiences.  For regular weekend showings, including a matinee performance on Saturdays, a typical ticket sells between £49 and £129.  Among the musical’s competitors, Phantomreigns supreme as the longest running show on London’s West End.  That the spectacle still fills Her Majesty’s Theatre and garners success thirty years later constitutes a remarkable feat.  This timeless quality of Phantom invites nuanced interpretive analyses by critics and academics alike.  Jerrold E. Hogle published a monograph on Gaston Leroux’s Le Fantôme de l’Opéra (1910), the novel from which Webber orchestrated his musical rendition.  As Leroux’s novel bears the markings of the Gothic aesthetic, which Hogle discusses in his study, Webber’s spectacle stages an interaction between the titular villain and the Gothic heroine, a relationship that bears striking similarity to that found in the archetypal Gothic narrative, The Castle of Otranto (1764).[i]    But as I watched the performance of The Phantom of the Opera for the first time, something else arrested my attention—something biblical.  Focusing closely on the spectacle’s characterization, mise en scène, and choreography, I progressively recognized the scriptural simulacrum.  The eponymous Phantom and Christine mirrored Satan and Eve in Genesis 3.  Utilizing both Gothic and biblical prisms when observing Phantom yields a magnified perception of Eden’s notorious tempter as he takes the form of the masked villain in Webber’s staged version of Leroux’s novel.
When the lights in Her Majesty’s Theatre dimmed and the curtain parted, I anxiously awaited the notorious Phantom.  Yet to my dismay, the opening scenes depicted an opera about the Carthaginian conqueror Hannibal Barca (247-183/1 BCE).  What?  Hannibal?  Where’s the Phantom?  Set in a Parisian opera house, Phantom opens with a frame narrative about Hannibal; strategically, it lulls the audience into a false sense of comfort.  Then it happens.  BOOM!  A body drops from the rafters, and the bewildered actors below assume the nefarious event confirms the work of the Phantom.  (When the corpse flew down into the scene, the spectators sitting to my left actually jumped in shock!)  But my initial impatience still lingered.  Where was the Phantom?  During the opening of the performance the Phantom fails to appear, and his existence is questioned continually by the characters.  The musical’s titular antagonist exists as a myth to some—a harbinger of death to others.  The Phantom is simultaneously present and absent, for the notion of his looming intrusion lingers throughout the performance.  This characterization of the Phantom confers a notion of incorporeality, and after the audience wade through a deluge of speculation, the Phantom finally appears.  He materializes, though, only for Christine, Webber’s heroine, and does so only through a transparent mirror in her dressing room.  The Phantom’s interaction with her bears an intimacy unlike any other in the performance.  As she offers him her hand, he pulls her through the mirror into a numinous dimension, and the orchestra commences a melody that accompanies a subterranean descent.
The Phantom and Christine’s journey through labyrinthine passageways rivals that of Walpole’s Isabella.  Descending into the bowels of the earth, corridor by corridor, they arrive at the Phantom’s lair, reminiscent of a Christian cathedral. But rather than showcasing any religious iconography, this underground chamber boasts a chiaroscuro that portrays more of an inquisitor’s oubliette than the interior of any sacred Christian structure. The Phantom operates within this mysterious underworld, and from here his ostensible omnipresence inundates the remainder of the performance.  One moment he occupies the rafters; another moment his shadow is visible behind the curtain.  Though the audience and other characters observe him, the possibility always remains that he may be incorporeal.  Observed in the context of his nature, actions, and influence on Christine, the Phantom reflects a diabolical image. 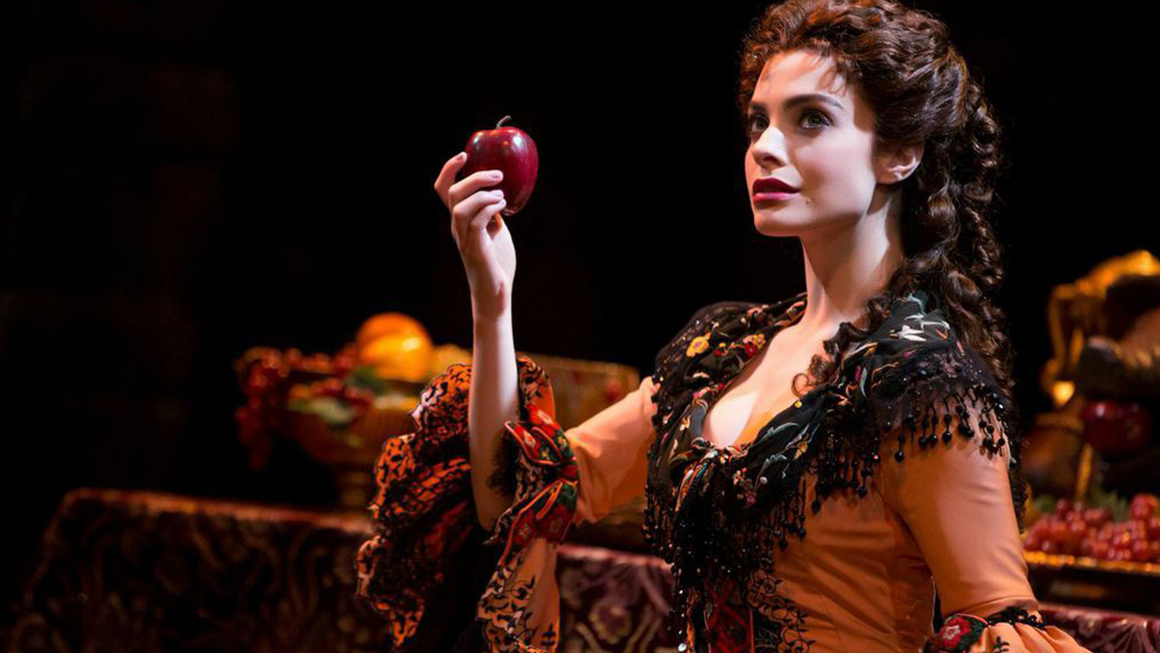 When I arrived at Her Majesty’s Theatre, I never expected to encounter a spectacle centred on Satan—that is, an allegorical Satan.  But the Phantom and Christine’s descent through Gothic labyrinths to an underground netherworld eventually leads to a pivotal scene in the spectacle, one that imitates the biblical scene in Genesis 3.  The Phantom desires to have his own dramatic piece performed with Christine as its lead actress.  During the performance, he clandestinely enters the climactic scene, clad and hooded in black, singing a duet with her titled ‘The Point Of No Return’.  The mise en scène and choreography that accompany this musical piece synergize into a scene of seduction wherein the Phantom tempts Christine to eat an apple as she sings the words ‘point of no return’.  Satan’s triumph over Eve in the biblical garden also results in a literal ‘point of no return’ or, in other words, her ignominious expulsion from Eden.  Presenting a spectral seducer, a solitary female, and an apple between them, Webber composes a key moment in the spectacle that suggests an allegorical interpretation of the Phantom’s satanic identity.
[i]See Jerrold E. Hogle, The Undergrounds of The Phantom of the Opera: Sublimation and the Gothic in Leroux’s Novel and Its Progeny. New York: Palgrave, 2002.
Christopher Scott is a PhD researcher at the University of Sheffield, focusing primarily on Edwardian fiction and with a particular interest in the literary Gothic mode, theological iconography, and representations of the natural environment in literature and film. Co-director of the Gothic Bible project, we can confirm that Christopher does not perform his research in subterranean chambers.